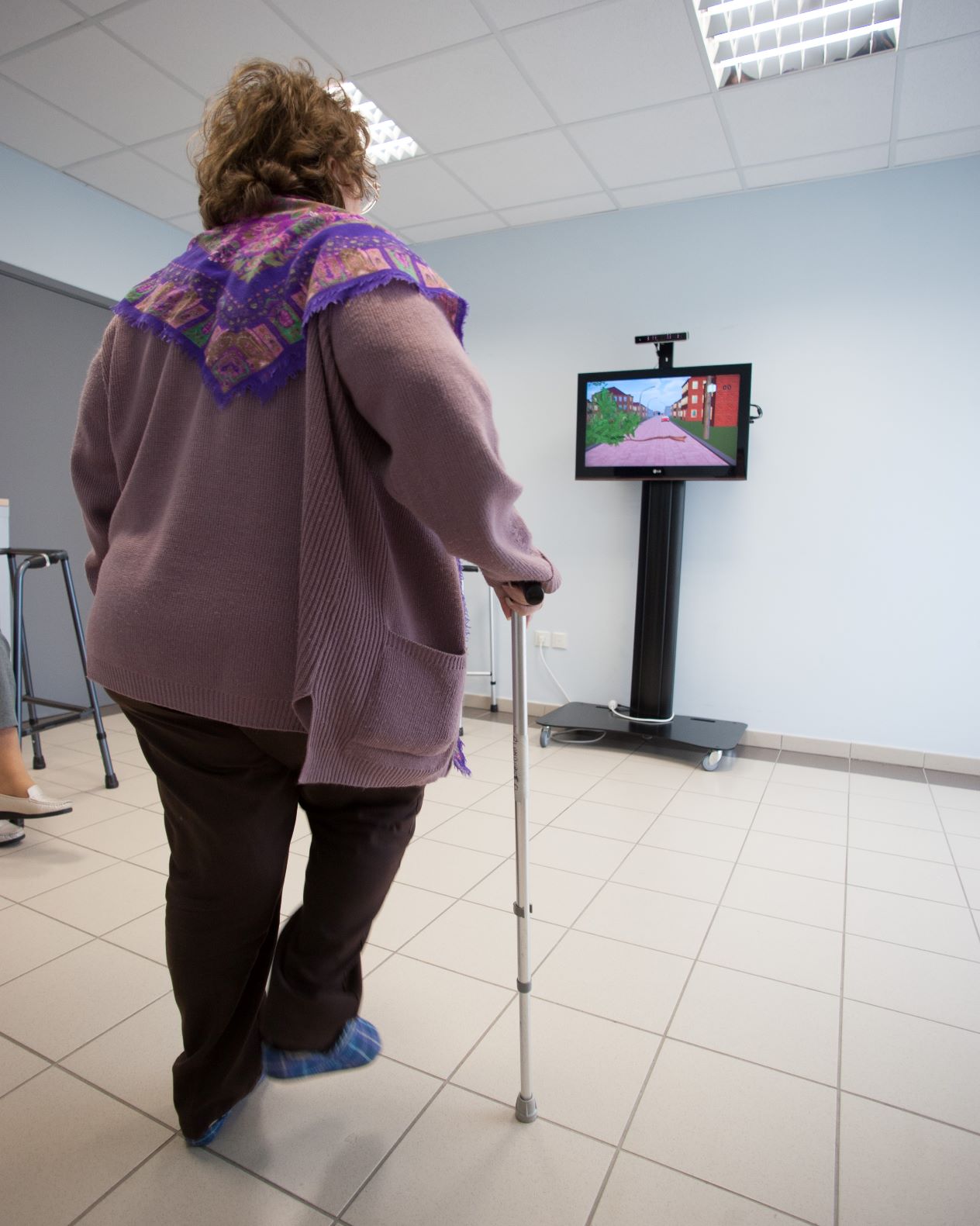 Despite frequent use of exergames in intervention studies to improve physical function in older adults, we lack knowledge about the movements performed during exergaming.  This causes difficulties for interpreting results of intervention studies and drawing conclusions about the efficacy of exergames to exercise specific functions important for the elderly population.

The aim of the current study was to investigate whether game and game level affect older adults’ stepping and upper body movements while playing stepping exergames.    A 3D-motion capture experiment was performed with 20 elderly (12 women and 8 men; age range 65–90 years), playing two exergames, The Mole from SilverFit and LightRace in YourShape: Fitness Evolved, on two difficulty levels, with five 1-min trials for each game and level. Reflective markers were placed on bases of first toe, heels, and lower back. Movement characteristics were analyzed with a linear mixed model.

Results indicated that both game and game level affected movement characteristics. Participants took shorter steps and had lower step velocity when playing The Mole compared to LightRace, while The Mole prompted more variation in step length and step velocity. Compared to LightRace, The Mole elicited larger upper body movements in both ML- and AP-directions and participants’ feet and upper body covered a larger area. Increasing difficulty level from Easy to Medium resulted in overall decrease of movement, except for number of steps and step speed when playing LightRace.  Even with only two games, two levels, and five trials at each, this study indicates that the choice of exergame is not indifferent when aiming to exercise specific functions in older adults and that exergames need to be chosen and designed carefully based on the goals of the intervention.

The European population is rapidly aging and we have a longer life expectancy than ever before. With advancing age comes increased risk for disease and functional decline, which again may increase the risk of cognitive impairment, frailty, and falls, with concomitant negative consequences for quality of life (Horak et al., 1989; Bolandzadeh et al., 2015; Bridenbaugh and Kressig, 2015). Falls in particular can have dramatic consequences in terms of fractures and fear of future falls, and are the leading cause for loss of independence among older adults (Hausdorff et al., 2001; Kannus et al., 2005). In order to keep the additional years added to life expectancy mostly healthy years, maintaining regular physical activity is heralded as one of the most important lifestyle factors (Chodzko-Zajko et al., 2009).

New technology-based exercise methods, such as exergames that open up for full-body interaction with computer games, appear promising as a means to promote and maintain physical activity.

Step-based games such as the Dance Dance Revolution (DDR) drew considerable attention in the early stages of exergaming research in older adults, much due to the low cost and the interaction between the sensory, information-processing, and neuromuscular systems during controlled body weight transfers (de Bruin et al., 2010). With increasingly advanced technology, exergames now have the potential to stimulate more complex and dynamic movements that contain variations in step length, direction, and speed, as well as inhibition of voluntary step initiations and avoidance of virtual obstacles. These are all skills that are necessary to successfully navigate through different situations in daily life.

A convenience sample of 20 community-dwelling older adults (12 female, 8 male) participated in the study. To be included, participants had to be over the age of 65 years, have no known physical or mental disabilities, and be able to walk safely without a walking aid. The participants were recruited from recreational exercise groups in the municipality of Trondheim, Norway. All subjects provided informed, written consent. The study was approved by the Regional Ethical Committee for Medical and Health Research Ethics, and conducted in accordance with the Declaration of Helsinki.

Based on a previous observational study on older adults’ movement characteristics during stepping exergames (Skjaeret et al., 2015), two step-based exergames were chosen for the current study, The Mole from SilverFit (SilverFit BV, Woerden, The Netherlands), and LightRace in YourShape: Fitness Evolved (Ubi Soft Divertissement Inc., Montréal, QC, Canada) (see Figure 1). Both games require the players to take steps in different directions and hit a target in order to play the game and score points.

Figure 1. Screen captures from game play of The Mole from SilverFit (left) and LightRace in YourShape: Fitness Evolved (right). The left panel shows the easy level of The Mole, with the green feet representing the player, and the target, a mole, in the middle right square. The right panel shows game play of LightRace where the player steps on the front (left) panel, the correct target, turning the specified area on the screen green.

Each exergame was demonstrated to the participant and each participant received one try-out trial for each game and level before playing the five recorded trials. There was a 1-min break after each trial, and a 5-min seated break between levels and games. The games were played in counter-balanced order across participants, and they always started with the easy level of the game. One researcher stood near the participant to ensure safety while playing the exergame.

After each game level, the participants marked the BORG Perceived Exertion Scale (score 6–20) (Borg, 1998) and answered a few short questions about enjoyment, possible usage, and fear of falling while playing. After completing both levels of each game, the participants filled out the Norwegian version of the Systems Usability Scale (SUS) questionnaire (score 1–100) (Brooke, 1996) to evaluate the usability of each system.

(...) During game play, all participants expressed high levels of enjoyment when playing both exergames, and participants preferred the Medium level to the Easy level due to the increased cognitive and physical challenge.

Game and Level also affected the movement area covered by the feet and upper body, and their ratio. While playing the two games, the participants covered a larger area with both the upper body and the feet when playing The Mole compared to LightRace.

(...) The results from the current study illustrate that it is not irrelevant which games are chosen to exercise these functions and show that movement characteristics are affected by the game, level of difficulty, and (even short-term) experience with the games. For future use of exergames in the context of exercise or rehabilitation at home, it is important to select exergames with care, taking into account what movement characteristics one wants the player to perform, how to manipulate difficulty level to maintain motivation without sacrificing the quality of the movements, and how to use the scoring of points to ensure that the proper movements are executed.