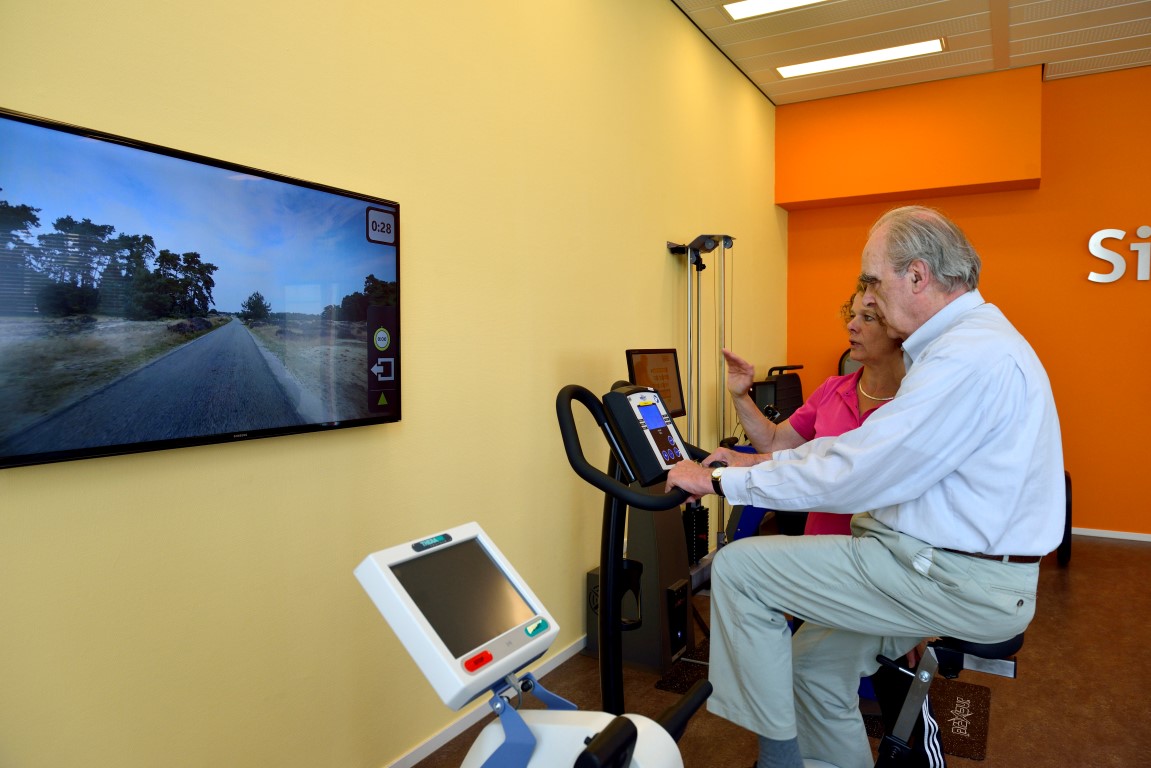 Virtual therapy for walking or cycling leads to better results on cognitive tests and balance parameters, higher exercise adherence, quicker achievement of training goals; and in addition, people enjoy it much more.

A study by Anderson-Hanley et al. (2012) explored the effect of  exercise on cognitive function in older adults. They looked  specifically at executive functions such as planning and divided attention. To identify this effect, three tests were used. The  results (see the below figure) show that the group that cycled  with virtual images (with VR) showed a significantly better cognitive performance than the control group.

Cho and Lee (2014) showed that using virtual images has a positive  effect on balance during walking. Compared to the control group, the VR group scored significantly better after the intervention  with regard to the parameters and test, shown below.

Feenstra (2013, unpublished) studied the effects on exertion enjoyment while cycling with or without virtual images using the SilverFit  Mile. The results show that patients enjoyed cycling with  images much more than without.  The addition of virtual  images to cycling in most cases improved exertion tolerance  as well.

There is a number of research done to  the effect of video images on balance and equilibrium. Every research stresses  the importance that the images connect closely to the subjective movement experience. Research done by Nishiike (2013) for example, analysed the speed of the film and pointed out undesired movements of a video. Especially movements in which the horizon rotates too much or gets shaky and wobbly can cause a nauseous feeling similar to seasickness. Bonato (2009) describes this effect with healthy 19-year-old participants.

SilverFit has therefore developed a specific methodology to avoid this kind of shaky movements. A film is recorded with a scoot mobile that is adapted for this purpose and uses a self-stabilizing camera. Furthermore, all images are edited afterwards with stabilisation software and tested by a person who is highly sensitive herself for the above-described effect. In this way, we can be sure that the videos we record do meet the very strict requirements of a medical device

Cycling through nature and cities, travel the world with the interactive bike SilverFit Mile

Enjoy great outdoor bike rides from the safety of your care home thanks to the SilverFit Mile.

Experience a few of our route movies yourself.

The SilverFit Mile offers more than 170 movies around the World

Read more
Create your own routes

Create your own routes along familiar places for your patients, using Google Street View

What does the SilverFit Mile consist of, and what additional options are possible?