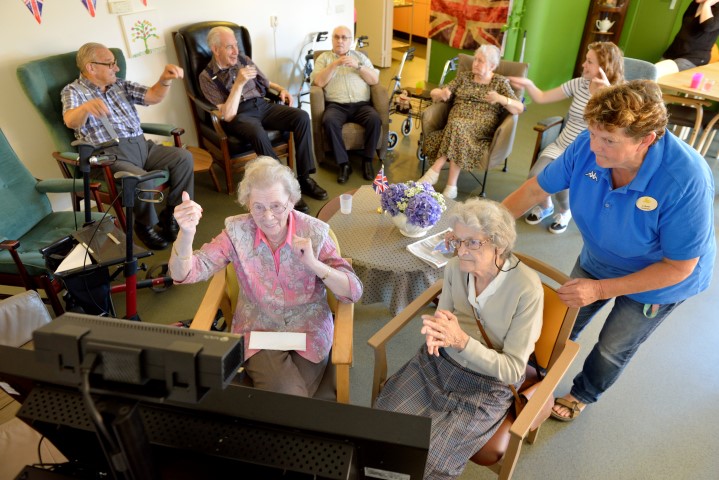 Both for the design and for the development of specific activities, we have assumed scientific research, supplemented with practical experience. All ideas are first tested in practice with people with dementia, informal caregivers and care professionals, and then further developed.

Always something to do

A study in the US (Schreiner et al., 2005) showed that nursing home residents with dementia laugh 7x more times or have fun during activities than during the rest of the day. They often spend the remaining time alone and / or apathically. The study recommends an approach where there are activities throughout the day that people can participate in. An appealing example is described by Volicer et al. (2006). All kinds of suitable activities are set up in a nursing home for veterans: morning call, marching, a military club. This works without attracting additional staff. All employees, from high to low, contribute to this approach.

Cycling with route films appears to have positive effects on endurance and cognition, in particular on the capacity to plan tasks.

In the Netherlands, Professor Scherder (Scherder, 2010) is an important advocate of the importance of an active lifestyle for people in the nursing home, for example in TV programs such as DWDD. He shows that being physically and socially active improves well-being and that problem behavior decreases. Based on an evaluation of 30 studies, Heyn et al. (2004) come to the conclusion that exercise for people with dementia has a clear positive effect on physical outcome measures such as cardiovascular fitness, strength and flexibility; but also on functioning in daily life, cognition, and behavioral problems.

Testad et al. (2014) looked at different types of activities in nursing homes. They show that reminiscence, such as exercises with personal photos, reduces depression. Activities with music lead to less agitation and unrest.

Edwards (2013) did research into the effect of an aquarium in the living room of nursing home residents with dementia. It turned out that people who could watch an aquarium ate better on average and had fewer weight problems. That is why the SilverFit Alois has its own (virtual) aquarium!

A personal approach is essential: offering activities that suit him or her for each individual. Brownie et al. (2013) show that with such a personal approach people are less bored, less depressed and less dependent on help. Family members are more satisfied and employees indicate that they have more personal contact with the residents.

Brownie, S. and Nancarrow, S. (2013) Effects of person-centered care on residents and staff in aged-care facilities: a systematic review. Clinical Interventions in Aging 8: 1-10.

DAZ (2014) Evaluation report 'Residents with dementia on the move. About the experiences with 16 SilverFits'.

Edwards, NE and Beck, AM (2013) The influence of aquariums on weight in individuals with dementia. Alzheimer's Disease and Associated Disorders 27 (4): 379-383.

Heyn, P. (2004) The effects of exercise training on elderly persons with cognitive impairment and dementia: a meta-analysis. Archives of Physical Medicine and Rehabilitation 85: 1694-1703.

Testad, I. (2014) The value of personalized psychosocial interventions to address behavioral and psychological symptoms in people with dementia living in care home settings: a systematic review. International Psychogeriatrics: 1-16.

All the benefits of the SilverFit Alois at a glance

Discover all the activities the SilverFit Alois offers

What is delivered when you order a SilverFit Alois?